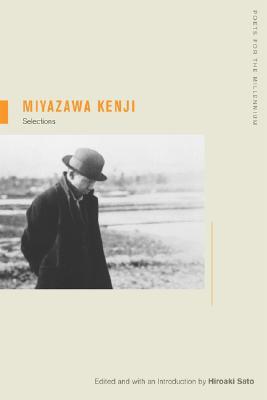 Beneath the solitary Saddle Mountain terrain,

Witness the birthing of a maiden rice grain,

Dances to the mist, a worm in its silken nest,

As blissful serving of brown rice and miso  grace,

Against the black lacquer, the Lotus Sutra sings,

A crow in a hundred postures, Miyazawa dreams,

In the realms of Buddha, an Asura incarnate sleeps,

Is this a cosmos melancholy of a peasant or a poet?

Ask, free-verse galaxy to the bodhi tree, as I silently read.

If reading prose pushes you to edge of your vulnerabilities; poetry snatches the throne on which your brooding vulnerabilities reign. Resembling a drop of water, that with the slightest touch of sunlight becomes a chimerical glass - a mirror, through which the world shines brighter than the spectral extravaganza of a rainbow; poetry in its concise form is a collection of these glassy droplets from which one can view the vivid colours of the life and death, each droplet being carefully harvested into a river of emotions making the worldly spectrum lucid to its colour blind observer.

Nature awakens to the first call of Spring. Trees birth their first tender leaves to the melodious songs of young birds. The mist on the ground breathes life to the very Earth, on which it resides. The fiery sun crackling through the cerulean aerial carpet, the first pink sakura sprinkling, the pitter-patter of tadpoles taking their first swimming lessons, the newly found giggles of children that were lost in wintery gloominess and the enthusiastic soil waiting for a prosperous harvest. Life begins in spring. Art begins. Life is art and living is the masterstroke of the artist. Miyazawa Kenji’s poems are works of such  sophisticated art that encompasses a world view  attaching human life to nitty-gritty of nature, as all living beings  come under one  mammoth umbrella of the wholesome existence of universe. Through nature one derives acts of compassion and enlightenment. The Louts Sutra of the Wonderful Law seeps through every stanza of Kenji’s poems encompassing a “world view” as opposed to the tapered “human life”, transforming nature into labour of art through Kenji’s eyes.

The phenomenon called “I”

Is a blue illumination

of the karmic alternating current lamp

with landscapes, with everyone

yet remains lit with such assuredness...(Proem)

Born on Aug’27, 1896 in Hanamaki, Iwate Prefecture in Tohoku, Kenji the son of an affluent pawnbroker, had converted to Nichiren sect of Buddhism, in his adolescent years, being a staunch follower of the teachings of Lotus Sutra. Kenji perceived the world as one which connected all living organisms through a common thread of universal enlightenment. In a world where suffering has to be endured, Kenji’s poems emotes intense emotion as a vehicle that travels through conscious surroundings of practicality constructing a bond between the mind and the nakedness of radical elements of conflict. Kenji’s struggle between inner and the outer world, seeking refuge in realms of Buddhism, became the ultimate  building block of his future works. Justly, placing under the contradicting title of ‘Spring& Asura’, Kenji displays the blaring discrepancies of the universe.

How bitter, how blue is the anger!

At the bottom of the light in April’s atmospheric strata,

Spitting, gnashing, pacing back and forth,

I am Asura incarnate.....(Spring& Asura)

The above verse identifies the fundamental quandary that eclipsed most of Kenji’s life. Approximating  to an Asura ( evil deities or spirits fond of fighting and quarrels who are constantly at war with various heavenly beings...), Kenji was forever at war with himself and the superficial environmental exterior as he tried to find poise with his  internal modernist outlook and  the external conservative rudiments. Adhering to the basic principles of Buddhism of renouncing anger to gain bodhisattva (enlightenment), Kenji described his innate anger as a stubborn malevolence   that compels him to “smash the desk with his whole body” and its luxuriant red colour that later feels like water turns him into a “madman”. Kenji defines himself as “an Asura in the world of humans becoming a Buddha”.

Kenji’s works are diversified branching into various short plays, children’s stories; all trying to create a bridge between the fundamental intuition and practicality with a certain dose of satire. Among his numerous poems, few of my favourites are the ‘The Railroad’ – where all the living beings, be it animals, insects or humans suddenly take a break from their usual chores to give a grand welcome to the new train that passes in its steamy reverie. ; ‘The Doctor’, ‘ The Crow with Hundred Postures’ , “The Politician’, ‘Refractive Index’, ‘Haratai Sword- Dancing Troupe’ and many more that bring out the brilliance of a man who interlaced the world in a single consciousness of  life, as it is said.

Desolate grass ears, the haze of light
the verdigris extends serenely to the horizon
and from the seam of clouds, a variegated structure
a slice of heaven’s blue.
My chest retains the strong stab.
Those two kinds of blue
Are both the properties that Toshiko had.....(Okhotsk Elegy)

Kenji was most affected by the loss of his younger sister Toshiko who died on Nov’27, 1922 after a long illness.  A bulk of his poems from   Vol. I & II are dedicated to Toshiko and the anguish he endured from the death of his beloved sister. ‘Love & Fear’ was the first poem where Kenji expressed his concerns over her illness and his heartache further deepened as he penned numerous poems:- ‘The Voiceless Grief’, ‘The Morning of the Last Farewell’, ‘Pine Needles’, ‘Volcano Bay: A Nocturne’, ‘White Birds’..... as he eulogised Toshiko.

Calling to each other sharply, sorrowfully

In the moist morning sunlight,

They are my sister,

Because her brother has come, they call so sorrowfully.......(White Birds)

Geoffrey O’Brien who has written an preliminary chapter in this book, rightfully calls Kenji as “a modernist in the mountain”. Miyazawa, much to his father’s angst decided to be a peasant and lived a humble life away from the riches that he was accustomed too. A teacher of Agrarian art, Kenji wrote poems in meteorology, sericulture, crop rotations, botany, geology and mineralogy. Was then Kenji a poet who became a farmer OR a farmer who became a poet? Miyazawa Kenji brought each element of nature amalgamating into humanity, his words breathe life into inert objects; nature and Kenji became one and thus is becomes difficult to take away the farmer from the poet and vice-versa. As the philosopher, Umehara Takeshi puts it:-“Kenji saw in Buddhism a grand view of the world that is consistent with the finding of modern science”.

I do not want pleasure

I do not want fame

Now I just wish to offer

During his last years, Kenji scribbled his poems with a titular date registering the day on which he wrote the respected poems. Similar to his teachings which were liberated from the conventions of mandatory textbooks, Kenji truly believed that a poem should be written spontaneously with the very first impression one gets as a onlooker. Thus, it is not surprising that the poem that gifted Miyazawa Kenji the reflection of a saint was the one that he had scribbled before his death and had not amended. ‘November 3rd or Ame ni mo makezu( Be not defeated by the Rain) acquired an iconic status that became a cultural treasure in Japan, a country that once failed to recognize the genius of this reclusive , modest farmer. The poem is compared to another brilliant poetic verse of Joyce Kilmer’s “Trees”. 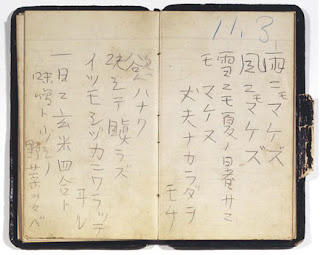 Be not defeated by the rain, Nor let the wind prove your better.
Succumb not to the snows of winter. Nor be bested by the heat of summer.

Be strong in body. Unfettered by desire. Not enticed to anger. Cultivate a quiet joy.
Count yourself last in everything. Put others before you.
Watch well and listen closely. Hold the learned lessons dear.

A thatch-roof house, in a meadow, nestled in a pine grove's shade.

A handful of rice, some miso, and a few vegetables to suffice for the day.

If, to the East, a child lies sick: Go forth and nurse him to health.
If, to the West, an old lady stands exhausted: Go forth, and relieve her of burden.
If, to the South, a man lies dying: Go forth with words of courage to dispel his fear.
If, to the North, an argument or fight ensues:
Go forth and beg them stop such a waste of effort and of spirit.

In times of drought, shed tears of sympathy.
In summers cold, walk in concern and empathy.

Stand aloof of the unknowing masses:
Better dismissed as useless than flattered as a "Great Man".

This is my goal, the person I strive to become.

Hiroaki Sato, does a marvellous job by bringing  absolute gems from Miyazawa’s poetic treasure that encompasses rural life into the art of poetry, unearthing the invisible footprints of man that were misplaced in the fleeting cosmos of ignorance and prejudices while imparting the  vibrant sensibilities to a colour-blind spectator like myself. Comprehend this book, cherish the words while you listen to the chuckles of your children, the chirping of birds, the loveable wagging of your dog’s tail, the rhythmic flow of water, the swaying of leaves or the crystalline spectacle of snow tapping your window and under the open sky when the fiery sun hides behind those wispy clouds, think about a man whose words transformed all these elements into one whole entity and ponder on how cloistered verses found a voice that is listened delightfully through decades.