Johannes Brahms can make autumn leaves dance in one of nature’s most graceful circle. The chill in the air was about to birth the season’s very first snowflake. The clatter of rusty shovels being removed equated to the asinine banters of old women gossiping on the porch. After the death of its final leaf, the trees lay barren like a country that had abruptly lost its people. There were no birds to be seen, yet I heard them chirp a summer song. The fervent barking of a mongrel was followed by a pair of impenetrable irises; blue as the deepest ocean. The frost on my eyes made it tricky to see the peculiar lady carrying a christening bowl with glistening chicken soup. I rubbed my eyes to wipe the frost and something terribly stung me. It was morning, again!! The sunlight on my pillow showed beads of sweat on my arms and the frost along with the barking dog and the lady magically vanished. While poor Brahms still played his 'Lullaby' at my bedside, Emerence saw that I still stayed in bed. It’s been couple days now that I sleep with Emerence’ s ‘mirror-like’ face and wake up trying to experience the sound of her soprano voice. When I open the pages of ‘The Door’ , my heart beats faster than the breeze on my window and my lips are bitten while I take deep breathes, for Emerence brings out my emotional vulnerabilities ; letting my scars bleed through someone else’s wounds.

“Sometimes the strongest women are the ones who love beyond all faults, cry behind closed doors and fight battles that nobody knows”- Anon.

Indeed, the silent , big-boned lady with an impenetrable face and having the persona of a Valkyrie ; Emerence was the strongest of the lot. A mystery that deepened the moment the door was shut. What kind of a flower was Emerence? A rose or a white oleander that tenderly grew around the fence. The now tranquil garden had once seen the dishonorable terror of red and white roses and the bloodbath that a few revolutionary chrysanthemums caused as they tore apart the fair camellias. They were bruised petals scattered like feathers of a hunted dove; each time when a flower revolted, irrespective to their colour. At times it was better when the pristine flowers hanged themselves from the devilish vines because shootings never seem to work all the way. And , “ if you don’t die straightaway, they have to come over and beat you to death or shoot you back”, till all was left were trampled saplings.

“How can I truly describe her, or trace the real anatomy of her compassion — this woman who peopled her home with animals?”


Emerence comes across as an eccentric, arrogant lady bearing an unfathomable obscurity. When the writer hires Emerence as a caretaker, a series of love-hate relationship flourishes between the two ladies. The oddity of Emerence‘s demeanor created a haunting mesh of rumors of what really thrives behind the closed door of the villa. With every tiny window that Emerence opened,it led a draft of fresh air into Emerence’s concealed life whilst the writer gaining confidence of someday being the owner of the clandestine key. But, was it this wretched key that the writer held firmly in her palm, be the very cause of her disloyalty to Emerence?


Szabo creates a marvelous personality through Emerence. Like a mother who bestows her true love at the rarest moments in a child’s life, Emerence spreads her loving arms ; her kindliness becomes the healing medicine for a hemorrhaged life. Her eyes were so intense that they could win battles and a heart that was warmer than the sun on a spring morning. Emerence was authoritative yet lovable; she was irascible on the verge of being bi-polar, yet she was comical and angelic when she smiled. She had an innate goodness that shone through her being a dedicated soldier to her profession and when she saved a helpless life from a deathly ditch by giving it a home. The porch of her villa became a dais for culinary entertainments. Her loneliness was veiled among the silken folds of her compassion. Her uprightness was stricter than the commands of a lion tamer and her honor came from her ambitious vibrant Taj Mahal. She valued the idea of absolute love because it is only love that saves, even through betrayal and death. The fragmentary chronicling of Emerence’s life demarcates the historical events that led the foundation of a burgeoning country and its people. I believe that when one comes across a commendable book, it becomes essential to cherish the prose with intellectual finesse and not mockery as it silently pays a tribute to the efforts and thoughts of the author. This book certainly deserves the said gesture.


Szabo makes it decisively known to the reader, the mindset of war victims and people who were spectators to the bloodbath of a country’s egotistical power battle and their probable abhorrence to religious validations. These sentences in the book, makes you think the legitimacy of religious norms adhered to find a welcoming acknowledgement and defining the presence of God, even if it means to sacrifice the well-being of human life, the very own premise that celebrates God’s worship. If it us humans, who ultimately authorize the matter life and death, choose to love and hate as per as our fallacious opinions and annihilate the very foundation of survival, then why do we use the pretext of the Lord to define our mortal egocentricities. Szabo’s prose is not only hypnotic but memorable, as her words follow you like a willful shadow never letting go even in the darkest night.

“You can't give anyone a greater gift than to spare them suffering...."

It was these among numerous other words that made me fall in love with Emerence. It may sound harsh even horrifying maybe, but when a blood drenched body lies on the gates of death, breathes gasping for its finality an additional bullet or a stab may just bring a smile on the departed rather than the sorrow that engulfs a slow death. When Emerence reminiscences her past while she stitches , I cry ; when she reprimands either Viola or the writer and shows a speck of her blooming affection ; I smile and when her eccentricities peak with obnoxious childish acts ; I laugh.

‘The Door’ is a powerful metaphoric representation of a woman and several others like Emerence who rather live a restrictive yet dignified life dwelling in the opaqueness of a wooden door than drowning in the nakedness of merciful alms. Emerence was more than a categorical flower; she was “a truly great lady, pure as the stars”.

Szabo’s writings make me reflect whether we who belong to the generation that frets on the mere number of ‘likes’ acquired on a social website, ever tried to know people like Emerence who have seen a country grow, perish and once again grow? Is it too late before an entire generation is wiped out and their stories are just mere sentences in newspaper archives? When a country is in its most horrendous turmoil and when innocent lives are cut short, isn’t it becomes necessary on the part of those alive to give a significant burial and carve memorable tombstones so that the perished do not have wasted lives. Is it too much to ask to honor the dead? Emerence makes me wonder about the degree of pain to be suffered that eventually dries up a human’s tear ducts. How many heart wrenching cries does it take to have a single serene bath? There are several who have move past the atrocities of egotistical power hoarders and have a flourishing life, but what about those who have closed all doors and have lost the key of faith along the way. With every inch that Emerence opens the door of her life, floodgates are opened within me, hurling me in a vortex of emotions. It is here that I wish so dearly to be sitting with Viola, Emerence, Polette, Sutu and Adelka on the porch, and while Emerence poured tea in her prettiest china I have an earnest desire that I was the sole owner of the key that would open the door to all of their precious lives.

“Like a truly great commander she settled everything around her in person, with a single impressive gesture………. Humankind has come a long way since its beginnings and people of the future won't be able to imagine the barbaric early days in which we fought with one another, in groups or individually, over little more than a cup of cocoa. But not even then will it be possible to soften the fate of a woman for whom no-one has made a place in their life. If we all lacked the courage to admit this to ourselves, she at least had done so.....” 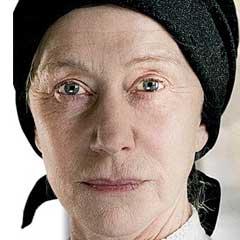 (** Actor Helen Mirren essaying the role in the namesake movie).