Two stones....two individuals. One game.....one world. The yin-yang philosophies sprouting from the wooden bowls on to a 19 x 19 arena. The small stones carrying the burden of altering destinies. In the realm of shōsetsu, Kawabata chronicles a factual reportage of a decisive championship game of Go held in 1938, between Honnimbō Shūsai and Mr. Kitano Minora. Abiding the culture of literary fiction, Kawabata confers fabricated identities to the players as well as to himself (Mr. Uragami) in this epic struggle that spans over the period of nearly six months. 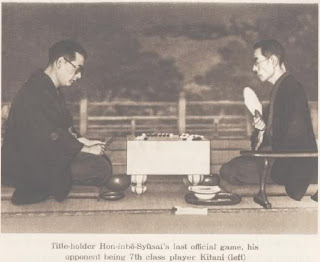 
“The game of Go is simple in its fundamentals and infinitely complex in the execution of them. It is not what might be called a game of moves, as chess and checkers.....”

The game of Go commences with the stone being placed at the intersection of the vertical and horizontal squares. The Black stone always taking the privilege of an opening move. The devious tap of the stone on the wooden grid echoes the hysteria of a transitional era. New laws and new tactical regulation overruled the aristocratic stubbornness by refined trickery. The strategic moves alternating the white and black stones delineated the struggle of aristocracy vs. liberalism; youth vs. old age; new vs. old; and art vs. gaming pragmatism.

“Shusai the Master would seem in a variety of meanings to have stood at the boundary between the old and the new.”

The frail and ill Master who revered the tradition of Go as a way of life and art , painfully observed the transition of his beloved painting into the commercial entity bound by scientific regulations and competitive aggressiveness. An inhabitant of the Meiji Era, the Master finds himself standing on the edge of modernity that challenges traditional mores and progress in a strange world with cries for equality. Mr. Uragami, in his reportage addresses the Japanese landscape that is suspended between the resistance of the old cultural mores and the democratic post- war revolution. The Master who was accustomed to conservative prerogatives struggled to rationalize the tactical moves of his young adversary Mr. Otake. The unorthodox Black-69 move struck like a spray of black ink spoiling the rhythm of the Master’s harmonic artistic play. Uragami wonders if the “invincible” Master was now as feeble as the scrawny legs that marred the authoritative illusion. Were the long recesses and the venue changes between the games, a defense from the fury of the Black stones? The Black stones were insensitive to the pleas of an aged clamshell stone. The exhaustion of insomnia that ravaged the serenity during the four day long recesses was now curious about the loneliness that sprang from the nostalgia of a waning art. The frail Master with all his might hung on to the last threads of his invincibility.

“In that figure walking absently from the game there was the still sadness of another world. The Master seemed like a relic left behind by Meiji”

On the bridge of transition was the battle of the Master to restore the vitality of the very game that made him bleed, justified? Is the birth of nostalgia, the loneliness of change more agonizing than physical death? Mr. Uragami poses a baffling question whether the metaphoric notion of “sealed in cans” would make our lives happier without our territories being invaded or are we equipped to forfeit our conquered territories to smell the fresh winds of change?

Go is fierce; it is a territorial game. Territory called “ji” in Japanese is formed by a continuous line bounding the adversarial stones in a captured territory.

“Had Go, like the Nō drama and the tea ceremony, sunk deeper and deeper into the recesses of a strange Japanese tradition?"

Go becomes the medium through which various boundaries are pitted against a strategic battle of sustainability and perishability. Otake’s robust and patiently timed moves paves a path to a modern strategic system that abides the essence of time and laws challenging the Master and capturing territories by abstract conditions of Justice. Mr. Uragami take this territorial battle further into the lives of the players and the existence of Go as a traditional art and as a embedded culture of a nation. The Game of Go that has its origins in China about 4ooo years ago is now an inhabitant of the Japanese culture. It has been explored and improvised by the Japanese societal mores for more than 12oo years to be an important artistic heritage of the Japanese cultural territory. The threat of this game being captured by foreign territories becomes conspicuous when Mr. Uragami expresses his skepticism over whether a foreigner (Dr.Dueball’s Germany- the game had attracted players from America) would do justice to the game of Go as he will be unaware of the history of the game and would treat it is a sheer game and not art that had become a way of life to many Japanese Go players. Does the mystery and the nobility of a game is diminished if played away from the land of its origin? Is a sovereign heritage greater than the art of the game? These similar worries was expressed by the Master when in a bid to reclaim his genius over the game, he witnessed Otake’s severe game brimming with scientific precision and slyness. The striking of the stones was echoing the violence of a tragic chasm of a competitive world that had bestowed the title of “invincibility” to the Master crafting a grand super-powerful figure. The Master became a citizen of a hallucinatory world where he achieved a winning immortality; a world where he believed he could not afford to lose. The mentioning of the fact that the Master had not played the Black stones for more than 30 years; inferences can be drawn of a possibility of the White stones being the honored territory of a Master. Is then this illusionary territory that brings tragic consequence when the sanguine vagueness is marred by the loneliness of reality? When does the player become larger than the game? When do the mores of cultural heritage become greater than its sovereign nation? When does the move ‘Black-69’ strike like the flash of a dagger piercing into the safeguarded territory of the player capturing his stone wall?

The continuity of the stones is established by placing them in row in a horizontal and vertical manner. Diagonally placed stones are vulnerable for a territorial captive attack.A lonely stone is unfavourable to the playing contestant.

Did the loneliness, the thought of him being the probable last surviving ‘Master of Go’ from the Meiji era made the Master vulnerable to Otake’s stubborn ambition? Like an isolated stone that becomes less powerful, did the seclusion of his artistic prowess in the modern world made him defenseless?

Mr. Uragami contradicts the play of contiguity by illustrating a breakage brought by modernity in the world of Go and its players. In the play of black upon white and white upon black, the threat of forfeiture prevailed right from the personal feelings of the players to the fate of the game in the altered Japanese landscape. In the emerging new age and fresh vitality of Go would the frequent threat of forfeiture interrupt the contiguity of history and traditions leading to the collapse of the stone’s sanguineness?


Life and death of the stone

A stone has a life and can be killed when entirely surrounded by the adversarial stone. In the war like game the stones and the players amalgamate into one whole existence. The notion of “sealed in tin cans” depicted during the play keeps the player from external disturbance. The game and its strategies follow the players until the game is over and even thereafter, as in the case of the Master. For a Go player each free moment is a risk management session increasing the pressures of time and the deliberation over the future moves brings certain quirks and nervous addictions. The sanity of life is found in the madness of Go.

“He is not just a genius. He is inhuman”

Unlike Mr. Otake, the Master was bled by the game of Go. The shadows of Go followed the Master hovering into the vagueness of his existence. As a true artist sculpting the Go art, the Master resisted from judging the persona of the opponent as it perverted the sanctity of the game. The Master calculated his every move even when he played a game of chess, billiards and mahjong. When the Master played his moves and the game consumed his life, at times making him lose the realization of his own identity. The stones had sealed his destiny as a ‘Go Master’ in a can of loneliness and the shrewd game has made him a sort of a martyr. Mr. Uragami who himself was an ardent fan of the Master, infers that there are two types of players: - one who are complacent with their game output and the other who meticulously enhance their art; the word satisfaction being a rarity in their game. The Master belonged to the latter. The Master had become a tragic figure, a ghostlike existence. Novelist Naoki Sanjugo who wrote himself to death asserts,-
“If one chooses to look upon Go as valueless , then absolutely valueless it is ; and if one chooses to look upon it as a thing of value , the a thing of absolute value it is."

So where does a player stop from not letting the game consume him? Is the art of the game that creates martyrs of its soldiers? The pleasure of the game brings seclusion from worldly exhilarations of life. The unadulterated sleep of a child is far fetched blessing in the cursed insomniac world ridden by chaotic configurations. When does the harmonic monochromatic ballet of Go become a war of spirit and destiny? Is then life greater than a man or is the man greater than the life? The long coarse white –hair on the Master’s eyebrow; the symbol of life’s longevity knew the answer and so did White-130.

Under the morbid tides of destiny the death of a stone. The game ends. Hope ends..... A new stone is astutely placed on an intersection. Once again, the game of Go begins , deciding a new destiny for its Master.